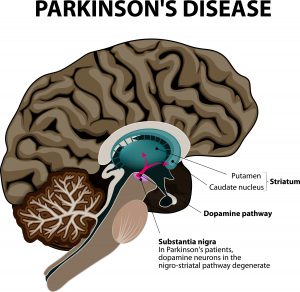 Your Neck and Parkinson’s

So how does your spine relate to Parkinson’s disease? Did you know that your spine is designed to protect your spinal cord? Your spinal cord is responsible for sending signals to and from your brain. When your atlas (top bone in your neck) misaligns, this creates a distortion of those signals along the spinal cord. Misalignments in the upper neck also affect the brain. A long-standing misalignment may be related to Parkinson’s symptoms due to its effect on cerebrospinal fluid flow.

NUCCA is unique in its approach to the spine. Through precise x-rays, the exact position of your atlas misalignment is determined. This allows for a gentle correction, uniquely tailored to you. There is no twisting, popping, or cracking involved in a NUCCA correction. Over time, fewer corrections are needed because of the specificity of this approach. When your atlas is in proper alignment, it allows for proper signals to travel along your spinal cord. This is when healing occurs.

Dr. Bello reported on a case of a 66-year-old female Parkinson’s patient. She had a head injury that led to her symptoms of a left-handed resting tremor, muscle rigidity, fatigue, and depression. Her symptoms were getting progressively worse over time. She received NUCCA care and noticed immediate symptom relief. Her relief remained over time.

If you would like to find a NUCCA doctor in your area, please visit the “Find a Doctor” page on our site.

About the Author: nucca